Making a Positive Difference with Plastic 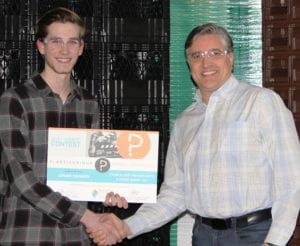 Computers, phones, the clothes you wear, the car you drive, the space you live in, the medical devices that save lives are all made better because they’re made with plastic. At Drader Manufacturing, we know that the positive side of the story of plastic can sometimes be overshadowed by negative press. More often than not, the negative stories you hear often come down to how plastic is being managed or mismanaged. We want to change that for the better. And so does the next generation. That’s why we’re proud to support events such as “Plasticurious,” a video contest for teens held last October and sponsored by the Canadian Plastics Industry Association (CPIA).

Plasticurious brought teens from across Canada together to focus on creating inspiring videos about how plastics benefit our lives. Kevin McTavish, VP of Manufacturing at Drader Manufacturing, and a member of the CPIA Board of Directors, was proud to be personally involved in the initiative saying, “Our intention was to engage young people in thinking and sharing ideas about plastics and how the decisions they make today about managing plastics affect their lives tomorrow. We thought a video contest was a good way to do that.”

Two of the winning entrants came from two of communities close to our offices including: Barath Velmurugan of Brampton and Jonah Hansen of Sherwood Park.  Jonah, who likes playing video games as well as building and programming robots, delivered his message about taking responsibility for recycling plastics in a video that included vintage footage of plastics manufacturing. Kevin McTavish and the Drader team recently celebrated Jonah’s achievement by presenting a Plasticurious celebration certificate to Jonah during his visit to Drader Manufacturing on Wednesday, February 21. Barath won first place in his age category with his video: Reduce n Reuse.

“The young Canadians who entered our Plasticurious video contest can take pride in the fact that their videos will help us take an important message to many other Canadians…’plastics are too valuable to waste,” said Kevin McTavish.